After having Tonfall released, I think it might be a good idea to go a bit deeper into some audio-dsp subjects. The easiest way to create a sound is by creating a wave out of an algorithm. You usually take a normalized variable between zero and one as the phase and pass it to a function. The phase itself must be incremented every sample by the following expression.


Tonfall provides wave-shaping function like sinus, triangle, sawtooth and pulse (rectangle). The last one is well known by me from the C64 sound-chip and provided setting the pulse width. A normal pulse wave is 1.0 for all phase value lower than 0.5 and -1.0 for the rest of the phases. If you modulate the center (0.5) back and forth, the sound gets more wide and living. This is called Pulse-modulation but also reflects to phase-modulation. The effect on this simple waveform is the same.

For Audiotools Pulverisateur we wanted to implement such modulations for all kinds of waveshapes, even curves. So I needed to find a good and fast way to translate the phase value into a modulated value that could be passed into the wave-function.

These were the requirements

Lets see what I came up with 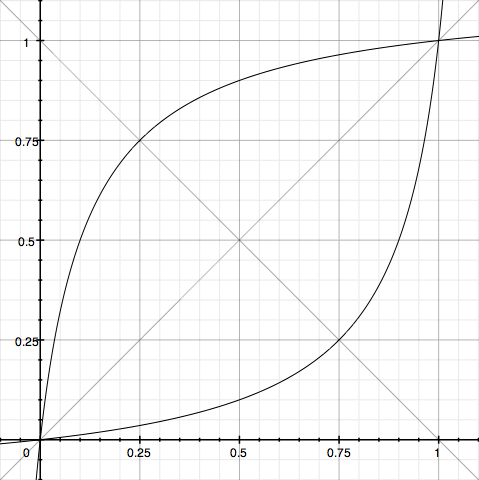 The best part is, that there a parameter t to shape the curve. The upper curve (t>0) extends the output value and it compresses it later. The lower(t<0) is exactly doing the opposite. It is symmetric to y=x. Lets compare some values of t. 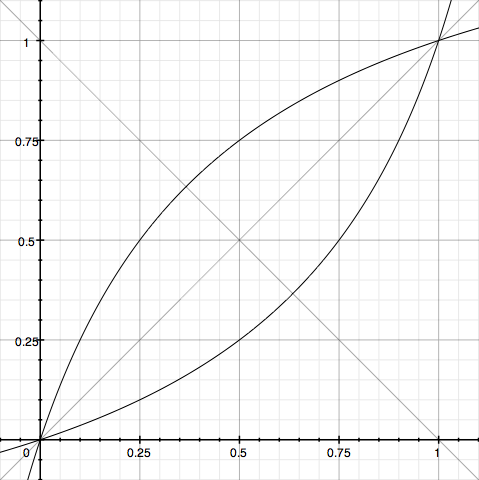 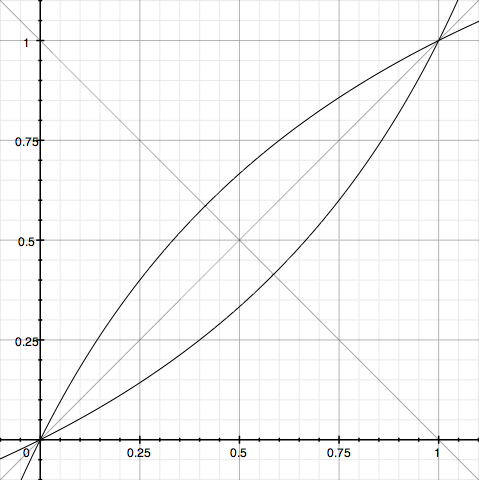 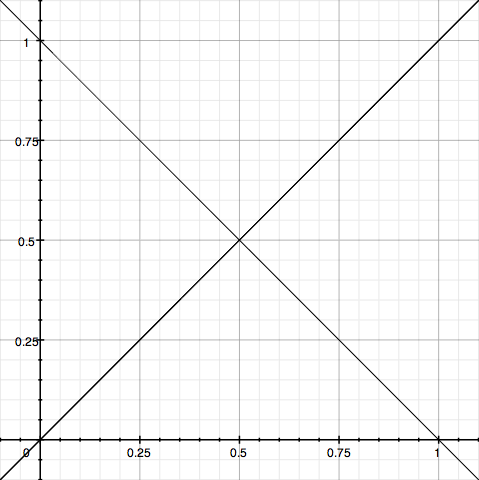 That is another benefit. When you pass t=0, you get a straight line.
Meaning: output = input 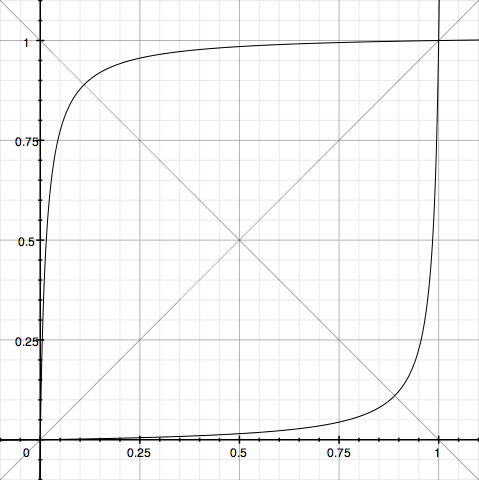 For really high values for t towards INFINITY you get in the end a right angle.

Costs
Curves like that are usually very expensive. I stumbled upon Super Ellipse, which distracted me for a couple of hours. It uses exponential functions, which I cannot run on every sample at 44100 Hz. I thought about taking a quadric bezier curve, but transforming the function to x leads to a sqrt-root. This solution presented here costs just one division and some simple algebra, which is okay for audio-dsp. I don’t know, if I invented this thing. If you know, what it is, let me know!

If you want to listen to the implementation, check out Audiotool, launch the application and create a Pulverisateur. Make sure to init the default patch and start with a single oscillator. Hope you like it!

Or just open a template I made on Audiotool.com